You Are What You Think: How Therapy Can Change Your Mind (Literally!) - Dynamic You

Sometimes it can be hard to change your mind or the way you think.  There is actually a good biological explanation for why this is – and it also explains how it’s possible with the right approach to be able to ‘re-wire’ your brain to think differently and literally – change your mind!

Find out how in this article…

Has someone ever told you to ‘think positively’ or ‘think differently’ and you’ve really struggled?   Most people have had this experience at some point in their lives.  After all we all have particular ways of seeing things because we all have different personalities and histories that can make us see the world in different ways.  But, it’s also possible to shape and change the way our minds work over time in the future – we do this all the time, and call it learning!  But how can we make our brain learn new ways of thinking or feeling in certain situations as well as making it learn new facts, figures and other day to day things?

Well, the human brain is very much a product of it’s own processes, meaning that an adage like ‘you are what you think’ really does hold some truth. In fact, there’s even a scientific term for this concept: neuroplasticity (essentially brain moulding).

So what is neuroplasticity, and how you can harness it to change your thinking and even emotions?

In days gone by, psychologists believed that the brain grew and developed until early adulthood and then stopped.  This would have meant that by the time we became adults we would have the maximum possible nerve cells in the brain (or neurons), and that for the rest of our lives they would gradually die off bit by bit.  They also believed that our brains would be fully formed and would not continue to change for the rest of our lives too.  But since sophisticated brain imaging systems like MRI scanners were invented, we have actually discovered something very different.

We now know that the brain is constantly adapting, and even growing new brain cells in certain regions – and that this happens for as long as we are alive.  But how does the brain know how to develop?  The answer lies in how we use it.  In the same way as using certain muscles means they grow stronger (by building more muscle cells each time we exercise them), we know that different parts of the brain can do the same thing.  So if you are using certain parts of your brain more than others, those parts of the brain will adapt and re-form slightly in order to get even better at what they do.  It’s this gradual shaping of the brain that scientists call neuroplasticity, and it’s the basis for how therapy can change your mind. 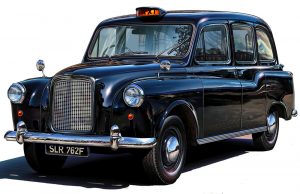 One study done by Eleanor Maguire looked at the brains of London Taxi Cab drivers.  She chose this group of people specifically, as in order to qualify, they are required to pass an exam known as ‘the knowledge.’  It involves months (and often years) of studying and memorising every road in central London.

She found that the brains of London cab drivers that had competed the knowledge consistently had changes in an area called the hippocampus – unsurprisingly, an area that is responsible for memorising information.  Because the cabbies had used their brains in a particular way, by driving particular routes very frequently in order to remember the roads, they had actually shaped their brains differently to other people and so the way their brains handled memories had changed as a result.  It is one reason why cab drivers are thought to have a lower risk of experiencing certain mental health problems such as PTSD.

How Neuroplasticity Can Improve Your Mood

Of course you don’t have to be a London cab driver in order to use your brain differently.

Studies have also shown that problems such as depression can be increased through the particular ways we have used the brain in the past.  For example different patterns of negative thinking, and thinking errors can occur if the parts of the brain that handle them are often used together.

One of the principles of cognitive behavioural therapy is that our thoughts can impact the way we feel in a very direct way. Over the long term, negative thought patterns or cognitive distortions can actually cause the brain to be more tuned to feeling down or depressed.

By recognising different thought processes as they happen – and working with them to consider how useful they are to us, it is possible to ‘re-educate’ the mind towards different ways of viewing situations that might lead to a number of different benefits – including changed emotions.

Cognitive behavioural therapy, unlike other forms of talking therapy, is based on the idea that the way we think has a direct impact on the way we feel. It stands to reason, then, that neuroplasticity very much applies here – or at least comes into play in a measurable way. Whether you’re leveraging the power of CBT for depression, OCD, anxiety, or any other problems, by treating it in this way you are quite literally rebuilding your brain.

Bringing Neuroplasticity Into Your Everyday

So other than CBT, how else can you harness the power of brain rewiring to make yourself a happier person?

Well, one great way can be using approaches such mindfulness and meditation. By practicing something like mindfulness meditation regularly it can increase out ability to have a different relationship with our thoughts, feelings and experiences – all down to changes that have been shown to take place in areas of the brain that respond to mindfulness that are involved in ‘turning on’ out psychological soothing systems.  These in turn can make it easier for us to feel ‘safe’ and content.

If you’re suffering from problems such as depression, anxiety, and OCD, cognitive behavioural therapy and the other techniques we’ve discussed can be really helpful if they are used in the best way for the problems you are experiencing. If you would like to find out more, why not get in touch with us today?